Situated on the east coast of Africa, this tropical paradise is blessed with 2500 kilometres of spectacular coastline. With its idyllic beaches fringed with palm trees and lapped by crystal-clear waters brimming with a dazzling array of marine life, this enchanting African nation is an ideal adventure holiday destination, with an abundance of activities on offer such as snorkelling, sunset cruises, horse-riding, dolphin tours and world-renowned scuba diving. Here is a list of must-see regions in Mozambique.

Mozambique’s capital, Maputo, is known for its well-preserved Portuguese colonial architecture. With its beautiful art deco architecture and its amazing setting on a hill overlooking the glittering Maputo Bay, the city of Maputo was once the Riviera of Southern Africa. Previously called Lourenco Marques, Maputo is Mozambique’s largest city and home to the country’s most prominent harbour. It is well-equipped with a wide selection of hotels, supermarkets, restaurants, a vibrant cultural scene and open-air sidewalk cafes lining the streets. Visitors can stroll down the jacaranda-lined streets of the Baixa neighbourhood in the Old Town, explore the Praca da Independencia square, discover the neoclassical City Hall and view the unique bronze-domed Maputo Railway Station. Other popular activities include: visiting the beautiful beaches of Catembe and Ponta d’Oura, and snorkelling and scuba diving in the warm Mozambican waters. 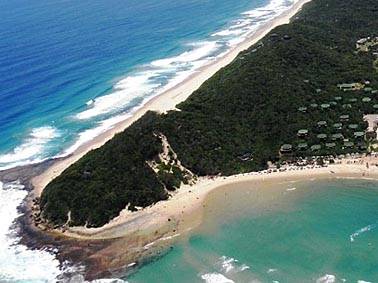 Just north of Mozambique’s border with South Africa, the town of Ponta do Ouro, meaning ‘Point of Gold’, lies on the country’s remote south-eastern coast. This holiday destination serves as a stop on many overland itineraries and is host to some of the most beautiful coastline in Africa. The colonial-era town of Ponta do Ouro is a seaside playground for tourists boasting beachfront resorts, seafood restaurants, and offering an array of outdoor adventure activities. The main attraction is undoubtedly the world-class scuba diving and snorkelling. Explore the thriving underwater world teeming with aquatic life, shop at the local craft market or take in the magnificent views from barefoot bars with a cold Mozambican beer in hand. Other popular activities include: deep sea fishing, surfing, quad biking, and jet skiing.

Set along the magnificent Mozambican coast, the city of Xai Xai serves as the capital of the Gaza Province. The city provides an excellent spot to stopover en route to the northern reaches of Mozambique. Twelve kilometres from the bustling city is the gorgeous Xai Xai Beach, the first popular tourist beach north of Maputo. Xai Xai offers plenty of attractions with a long stretch of beach and crystal-clear warm waters. A series of freshwater lakes also provide alternative entertainment including: kayaking, paddle skiing, windsurfing and excellent bird watching. Travellers must pay a visit to the amazing Wenela Tidal Pool, with its unique blowhole and natural tunnel linking the pool to the ocean. Running along the coast, a coral reef creates the ideal snorkelling spot and protects the beach from the crashing waves of the Indian Ocean. 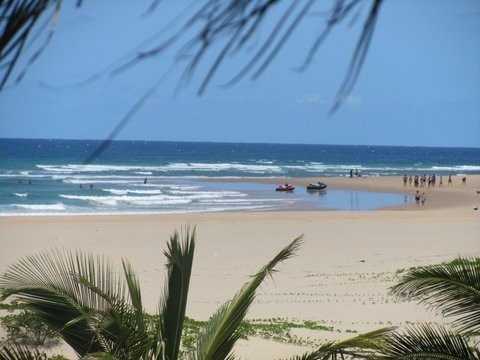 Resting on the south-eastern shore of Mozambique, roughly 485 kilometres of Maputo and 25 kilometres of Inhambane, the magnificent Barra Beach (or Barra) is an idyllic holiday destination. Pristine, gorgeous soft sands line the turquoise Indian Ocean waters, which are warm enough for swimming year-round. The beach stretches far enough to provide a good location for walks and is lined by coconut trees and wonderful beach resorts. Brightly coloured fish inhabit the reefs offshore, making this an excellent spot for scuba diving. There are also ample opportunities for fishing, surfing, kite surfing, quad biking, safari tours, dhow trips to the breathtaking Pansy Islands, and guided walks through the mangroves. Make sure to indulge in a little bar hopping to try the delicious local cocktails and culinary specialities. 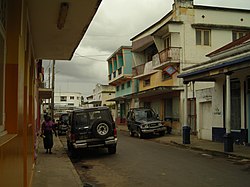 The Inhambane Province is known for its wide, almost land-locked bay and its beautiful but crumbling Portuguese architecture. Points of interest include the vibrant local market, intriguing heritage museums, charming mosques and the nearly two-century old Cathedral of our Lady of Concepti. Located within close proximity are the popular beach destinations of Barra, Tofo and Guinjata Bay, which offer excellent snorkelling, diving, fishing and watersports; and the tiny, remote Ilha dos porcos which is home to traditional villages and a few of the remaining namesake wild pigs. Tofo is also an ideal destination for animal lovers, as it is home to manta rays and whale sharks, while Barra features an incredible bird estuary. It is possible to take traditional dhow boats across the bay, allowing visitors to experience it in the same way it was hundreds of years ago. 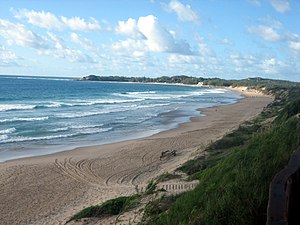 Idyllically set on the scenic Ponta da Barra peninsula in south-eastern Mozambique, Tofo is a small fishing village and an exceptionally popular tourist destination. The curved Tofo Beach is an ideal swimming beach lined with several lively beach bars, restaurants and accommodation options as well as a small local market. The smaller Tofinho Beach is quieter and is a great spot for surfing and fly fishing. Just beyond the beaches lie some pristine coral reefs inhabited by an impressive array of marine life which make it one of the world’s premier dive destinations with dolphins, manta rays and whale sharks regularly spotted. Other popular activities on offer include deep sea fishing, horse riding through the dunes, exploring the surrounding villages, or taking a trip to the nearby historic town of Inhambane where you can sample food at the local market or enjoy a leisurely dhow ride around the harbour.

The extraordinarily rugged Maputo Elephant Reserve forms part of the Lebombo Transfrontier Conservation Area. The reserve occupies an off-the-beaten-track, 50 000 hectare area of bush featuring an exquisite mosaic of lakes, floodplains, mangrove swamps, woodlands and forested dunes sweeping down to unspoilt golden sand beaches. This beautiful piece of untouched wilderness provides a sanctuary for an extraordinarily diverse array of African wildlife including, among others: leopard, antelope, crocodile, hippo, side-striped jackal, zebra, kudu, baboon and bushpig. It is also renowned for its large herds of elephant and impressive flocks of flamingo as well as a variety of exotic birdlife.

Situated in the beautiful southern reaches of Africa, the Great Limpopo Transfrontier Park is a joint venture between South Africa, Mozambique and Zimbabwe. The Great Limpopo Transfrontier Park has united several game parks and reserves in these three countries to create a vast cross-boundary wildlife sanctuary. It is the first phase in a long-term plan to create a transfrontier conservation area measuring 100 000 square kilometres. It is home to vast stretches of pristine African bushveld dotted with an array of wildlife.

Situated in the Mozambican province of Inhambane, Vilanculos is a laidback town featuring some lovely beaches lapped by crystal-clear turquoise waters. It is stocked with all the amenities needed for a fantastic seaside holiday. This bustling coastal town has its own international airport and serves as a great base for exploring the idyllic islands of the Bazaruto Archipelago. The town itself offers good diving, a wide range of accommodation choices and a lively nightlife. Visitors can jump on a traditional dhow boat and venture to the pristine Bazaruto Archipelago, browse for fresh produce and locally-made souvenirs in the bustling market in the centre of town, and spend the day soaking up the sun on an array of idyllic beaches. Other popular activities include: horse riding, game fishing, kitesurfing, scuba diving, snorkelling and sailing.

Resting in the warm Indian Ocean just off the coast of Vilanculos in Mozambique, the Bazaruto Archipelago forms part of a protected marine park and consists of five idyllic islands: Bazaruto, Benguerra, Magaruque, Santa Carolina and Bangue. These small, sandy, and exquisitely beautiful islands feature some of Africa’s best beaches as well as a number of large dunes and freshwater lakes, providing an ideal nesting habitat for black-winged flamingos. Just offshore visitors can explore a kaleidoscope of colourful corals teeming with an array of exotic marine life including manta rays, whale sharks, dolphins, turtles and dugongs. The islands boast several private luxury lodges, many of which provide excellent opportunities for water-based activities including scuba diving, snorkelling, deep-sea fishing and sailing.

Situated in the Mozambican province of Gaza, Limpopo National Park is known for its thriving wildlife. The Limpopo National Park or Parque Nacional do Limpopo was formed when an old hunting concession was turned into a reserve. It forms part of the GLTP, the Great Limpopo Transfrontier Parks which also includes the Kruger National Park in South Africa, and the Gonarezhou National Park in Zimbabwe. The park is home to an abundant array of wildlife including elephant, lion, Cape wild dog, leopard, rhinos, blue wildebeest, spotted hyena, Cape buffalo, kudu, giraffe, zebra, and hippo. Adventure seekers can enjoy the network of 4×4 eco-trails, as well as hiking and canoeing.

Mozambique becomes increasingly wilder and more beautiful further north, yet it still offers luxury and exclusivity for those who desire it. The city of Pemba offers exquisite sandy beaches where visitors can walk for miles without encountering another soul, while just a short boat trip off the mainland will take you to hundreds of small islands. Among the most captivating of these islands is the tiny ‘Mozambique Island’, a 500 metre-wide by three-kilometre-long crescent-shaped islet, which is dotted with historical churches, chapels, palaces, forts and mosques; as well as the idyllic Quirimbas Archipelago featuring with white-sand beaches lapped by turquoise waters surrounded by coral reefs teeming with marine life.

Situated on the eastern coast of Mozambique in Pemba Bay, the town of Pemba serves as the capital of the province of Cabo Delgado. This beautiful town is best known as a departure point for the exquisite islands of the UNESCO-listed Quirimbas Archipelago, but has plenty of its own beguiling charms. The ultramarine water of its almost land-locked bay is a diving mecca, featuring pristine coral reefs, a kaleidoscopic array of brilliantly-hued tropical fish and numerous dolphins and turtles, while the town, studded with enormous baobab trees and palm-roofed villages, encompasses enticing curio shops and lively markets. Visitors can look forward to exploring the underwater wonderland, relaxing on pristine beaches and spotting a host of wildlife and marine life including dolphins, whales and endangered dugongs in the Quirimbas National Park.

Off Mozambique’s northern shores lies one of the country’s lesser known travel treasures – Ilha de Mozambique. In the 17th century, this small island served as a trading post controlled by colonialist powers. The ruling Portuguese bartered gold, ivory and, most significantly, slaves for silk, spices and other exotic goods. Much of the historical architecture from this era remains today and as a result, Ilha de Mozambique was declared a Unesco World Heritage site in 1991. Stone Town is the island’s historical quarter, where you can wander past ancient forts, churches and mansions still elegant though weathered by the centuries. Makuti town is the modern part of the island, where you can get an authentic sense of how the residents of today live. Visit vibrant markets where the air is redolent of chilli and spices, and brightly coloured traditional fabrics paint a vivid backdrop to the comings and goings. The coastline is absolutely beautiful – fringed with secluded sand beaches where you can swim or snorkel in warm turquoise waters amidst brightly coloured tropical fish.

Located just off the northern coast of Mozambique, the Quirimbas Archipelago dots the glittering Indian Ocean. It is renowned for its rich history and natural beauty featuring white-sand beaches fringed with low-key resorts and offers some of the best diving in the country. The archipelago is home to some of the most unspoilt beaches and coral reefs found anywhere in the world, featuring an abundant array of Mozambique’s spectacular marine life. The Quirimbas Archipelago is comprised of a chain of over 25 coral islands, which escaped the 20th century with almost no development. Many of these islands fall within the Quirimbas National Park, providing a marine sanctuary for whales, dolphins, and endangered dugong. The area is known for its high-quality dive sites, many with exceptional drop-offs.